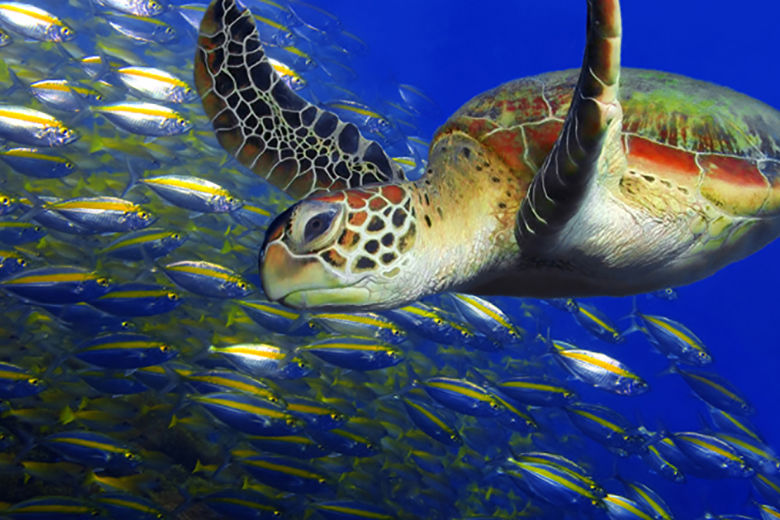 From June to October, the beaches of Nevis come alive with the scurrying of one of nature’s most beloved animals, the sea turtle. Each year, the partnership between Four Seasons Resort Nevis and the Sea Turtle Conservancy aims to educate and create awareness about the protection of these beautiful sea creatures through a joint program that helps researchers study the migration patterns of the endangered species that nest on Nevis’ beaches.

Four Seasons Resort Nevis sponsors GPS satellite transmitters to support the Sea Turtle Conservancy in tracking the migration patterns of sea turtles that return to Nevis to lay their eggs, and this year, even with the Resort’s ongoing renovation, the research needed to continue.

“This is our 13th year coming to Nevis and conducting research on these beautiful hawksbill sea turtles,” says David Godfrey, Executive Director of the Sea Turtle Conservancy. “For us, this partnership is more than just the research; it’s an opportunity to be a part of the Nevisian community year after year and see how much they truly value our efforts and being a part of this very important initiative.”

Along with the help of the Nevis Turtle Group and Ignacio Ottley, one of longest standing sea turtle participants from the Resort, the team was able to successfully locate and track two new nesting hawksbill sea turtles on the beaches of Cades Bay, located just 15 minutes from Four Seasons.

As they headed out to the beach in the late evening, no sooner had they spotted the first turtle nesting along the beach. The conservation team began taking notes, measurements, and nesting patterns when another turtle began to make its way up the banks, just a few steps away. And, just like that “Spongie” and “Patches” were cleaned up, tagged and sent back to the ocean.

Just one week before the team came to Nevis, the Nevis Turtle Group was already out looking for turtles when they found “Sundrop” nesting on Jones Bay Beach. Initially tagged in 2016, her return to Nevis shows the thriving population on the island and that the turtles do come back to nest on the same beaches.

Three species of sea turtles nest on the shores of Nevis: the hawksbill, the leatherback, and the green turtle. These majestic creatures journey hundreds of miles each nesting season to return to the same place where they were hatched and, under the glow of the moonlight, lay the next generation of sea turtles that will one day make the same journey. With only 1 in 1,000 to 10,000 baby sea turtles surviving to adulthood, the sea turtle conservation program needs to continue tracking and protecting these animals for future generations. To follow the tagged sea turtles, visit ConserveTurtles.org.

About Four Seasons Hotels and Resorts

Founded in 1960, Four Seasons Hotels and Resorts is dedicated to perfecting the travel experience through continual innovation and the highest standards of hospitality. Currently operating 114 hotels and resorts and 43 residential properties in major city centres and resort destinations in 47 countries, and with more than 50 projects under planning or development, Four Seasons consistently ranks among the world’s best hotels and most prestigious brands in reader polls, traveller reviews and industry awards.