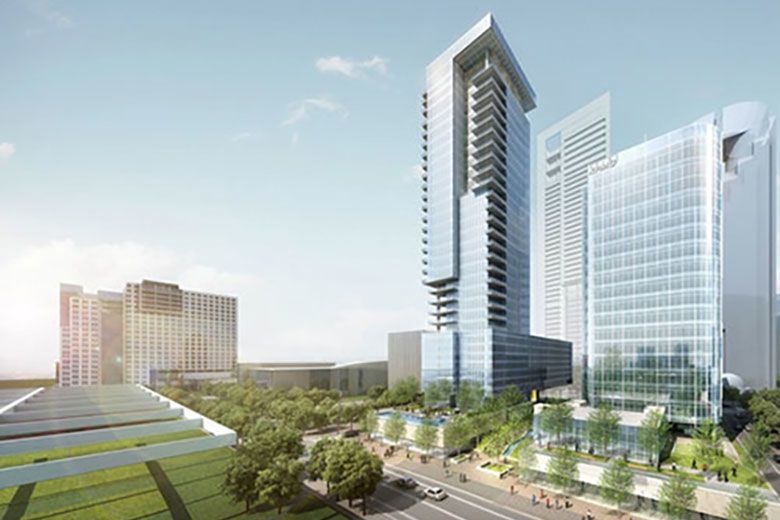 Dallas-based real estate developer Hall Group and Crescent Hotels & Resorts announced today the opening date of the highly-anticipated HALL Arts Hotel, which is currently under construction and set to open in the fall of 2019 in Dallas’ Arts District. The first hotel to open in the largest contiguous urban arts district in the nation, HALL Arts Hotel will channel the energy and vitality of the Dallas Arts District into an environment that celebrates the enriching, inspiring, transformative power of the arts.

Designed by award-winning firms HKS Inc. and Bentel & Bentel, HALL Arts Hotel will feature 183 modern guest rooms, including 10 Arts District-inspired suites with striking views of Downtown Dallas’ electric skyline. The property will also be home to two culinary concepts: Ellie’s, which is a dining destination inspired by Craig Hall’s late mother, Ellie Hall, and a second concept set to be announced in 2020. Additional hotel features include Ellie’s Lounge and Terrace, which will host live music and entertainment, over 6,000 square feet of exceptional, private event space, a rooftop pool with spectacular views of downtown, and an expansive art collection that will feature up to 50 influential local and international artists.

“Craig Hall and his team have dedicated themselves to investing in the future of the Dallas Arts District, our city’s artistic and cultural center,” said Mayor Mike Rawlings. “The HALL Arts Hotel will bring even more visitors, artists and entertainment to the vibrant district that has put Dallas on the map as an international arts destination.”

A perfectly tailored hotel experience for art lovers, discerning business travelers and those who appreciate the fine artistry of hospitality, HALL Arts Hotel promises a warmly authentic and crafted experience. The hotel will be managed by Latitudes: Lifestyles by Crescent Hotels & Resorts headquartered in Fairfax, Va. and be adjacent to HALL Arts Residences, a luxury 28-story residential tower slated to open in early 2020.

A CONNECTION TO CREATIVE EXPRESSION

HALL Arts Hotel celebrates the power of creativity and diversity through a remarkable array of creative expression in art, architecture, and design. Emulating this spirit, curator Virginia Shore—former chief curator of the U.S. Department of State’s Arts in Embassies (AIE) Program—has commissioned domestic and international art to infuse the hotel with feeling and beauty, stimulating inspiring conversation and contemplation.

“HALL Arts Hotel has inspired numerous artists, exceptional artists, from Texas, the U.S. and beyond,” says Shore. “Compelling artists, ranging from emerging through established, have embraced the opportunity to create work for the heart of the arts district. The commissioned artwork is meant to revitalize the public areas and ultimately heighten guest awareness of the importance of art in humanizing spaces.”

With an energy for culinary exploration and a mission to empower the strong women of the Dallas community, HALL Arts Hotel will pay homage to Craig Hall’s late mother, Ellie Hall, by creating a dining destination for locals and travelers alike that is artful and authentic. A confident trailblazer for women’s rights, teacher and one of the first women to enlist in the U.S. Navy, Ellie Hall never sought to meet expectations, but to redefine them. While her aptitude for the arts and sciences may have shone the brightest outside the kitchen, enjoying a fine meal with her family was always one of her great pleasures.

Ellie’s will combine its namesake’s command of art and teaching into a dining experience that satisfies the senses without pretense. Ellie’s will partner with purveyors who share a passion for wholesome, farm-fresh ingredients and present them in dishes that are at once elegant and informal—just like Ellie herself.

AN EXTENSION OF THE DALLAS ARTS DISTRICT’S DESIGN

A nod to simplicity and timeless sophistication, HALL Arts Hotel will be situated amongst architectural works from world-renowned, Pritzker Prize-winning architects, including Renzo Piano, I.M. Pei, Norman Foster and Rem Koolhaas. Designed by HKS Architects, HALL Arts Hotel will be a ten-story structure that flaunts a sleek, contemporary glass and steel jewel box design that fits in seamlessly with the Arts District’s architectural aesthetic.

Once inside, guests will notice that the hotel’s interior public spaces draw upon design elements from its exterior surroundings. Design group Bentel & Bentel expand on those elements by offering expansive interior spaces that feature sprawling white wall space to provide the background suitable for the extensive art collection being exhibited. The guest rooms are similarly conceived as moments of cool and calm hovering over the city views, featuring custom built-in furniture to emphasize a central tenet of design—an environment where everything is purposeful and meant to not intrude on the experience of the spaces.

HALL Arts Hotel will offer over 6,000 square feet of sophisticated meetings and events space, which include two multi-purpose salon spaces, the HALL Arts Boardroom and a one-of-kind 1,737 square foot ballroom, complemented with advanced technology. The only hotel event spaces in the Dallas Arts District, the location will be a sought-after destination for memorable weddings, celebrations and corporate events for up to 150 guests.

Infused into the artfully crafted environment, the meetings and events spaces are designed to engage with the dynamic street edge, becoming an extension of the neighborhood and expanding the Texas Sculpture Walk, urban gardens and performing arts venues. Located on the ground level of the hotel, the modern ballroom is designed with spectacular Lasvit chandeliers, large, commissioned artwork by Clare Woods and floor to ceiling windows.