The Boston and Cambridge lodging market accommodated approximately 7.5 million roomnights in 2018, growth in demand of 3.4% from the prior year. The market’s supply increased 2.8% with the opening of four new hotels and a guestroom expansion which combined for approximately 760 new rooms available nightly. As a result of these dynamics, the market’s occupancy increased 0.3% to 82.7%, its highest point in history.

Despite the market’s continued demand growth and capacity constraints through much of the year, average daily rate (ADR) increased only 1.6% to $262. Similar to the trends experienced nationally, the market’s revenue per available room (RevPAR) has begun to decelerate, increasing 1.9%.

Of the six submarkets analyzed by Pinnacle Advisory Group, the Cambridge set of hotels experienced the largest increase in RevPAR. The ADR in Cambridge increased 2.9%, due in part to many of its largest hotels undergoing renovations in 2017 and early 2018. These increases to rate, matched with a 0.5% increase to occupancy, resulted in a RevPAR increase of 3.6%, greatly outperforming the overall market. As the only submarket to experience a decline in occupancy, the hotels in the Fenway/Longwood Medical Area experienced the weakest RevPAR growth of 1.0%. 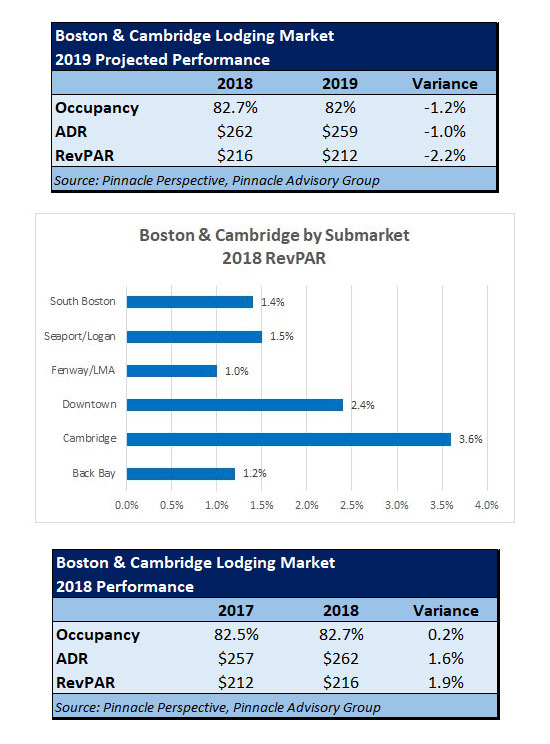 Although the key economic indicators are leading to a healthy outlook for the U.S economy in 2019, the Boston & Cambridge lodging market has two factors which will negatively impact its performance; supply growth of over 5.5% and a weak convention calendar comparative to the prior year. As Pinnacle has reported previously, the market is expected to experience a decline in RevPAR in 2019.

The Pinnacle Perspective reports the Boston & Cambridge lodging market’s performance on a monthly and annual basis. Individual reports provide an indication of performance metrics by submarket, hotel size, and price point. Data is collected from over 95% of the market’s rooms supply and aggregated to provide detailed market reports for its contributors.