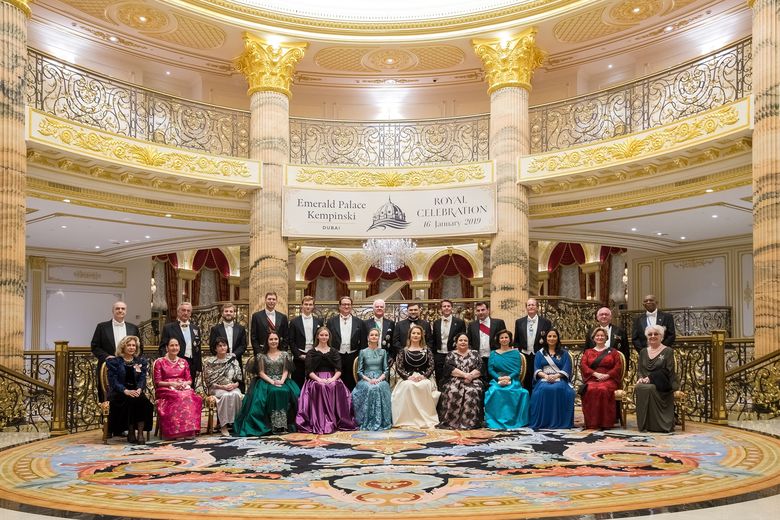 The Emerald Palace Kempinski Dubai hosted on 16 January 2019 a spectacular Grand opening ceremony with fireworks and classic live performances. Members of the European Imperial and Royal Dynasties, nobility and the high establishment from around the world as well as UAE business establishment and prominent personalities joined the outstanding event. The highlight of this Royal Celebration was an exclusive opera performance, accompanied by a philharmonic orchestra in the lush gardens of the Palace and a breath-taking firework display, which illuminated the sky above Palm Jumeirah.

Dr. Nver Mkhitaryan, owner of the hotel and 11 nobilities from Europe and other parts of the world founded on the same evening “The Royal Club”, which will in the future host cultural, social, academic and philanthropic events under their patronage to preserve centuries-old honorable traditions and lend a helping hand to those in need in the developing parts of the world. The Club will also work to enhance social awareness and to collaborate with local and international philanthropic organizations.

Located on Palm Jumeirah, The Emerald Palace Kempinski Dubai has set an unprecedented standard of comfort in luxury hospitality. This elegant palace symbolizes a timeless architectural masterpiece in a city that forever continues to impress.

With 383 luxurious rooms and spacious suites, as well as 8 royal villas The Emerald Palace Kempinski pays tribute to European craftsmanship with its 17th century-inspired interiors and opulent architectural touches, where everything is centred around flawless service and utmost guest comfort.

Guests of the Emerald Palace Kempinski Dubai are spoilt for culinary choice with 8 exquisite restaurants, bars and several more dining areas, including miX Alain Ducasse, the first restaurant of the grand chef in the United Arab Emirates. Extensive leisure facilities include a 500-metre white sand private beach, an exclusive Cinq Mondes Spa and Wellness Centre that extends over 5,000 square metres, a private cinema, dedicated clubs for kids and teenagers and much more. The Emerald Palace Kempinski Dubai also offers a wide range of business, conference and banqueting facilities, designed to accommodate the most sophisticated events.

An embodiment of majestic luxury in its purest form, Emerald Palace Kempinski Dubai set on Palm Jumeirah, represents an architectural masterpiece that pays homage to the palaces of 18th century Europe and has been designed for highly demanding guests. From the grand atrium shimmering with gold leaf and a montage of mirrors, to the generous rooms accentuated by intricate handcrafted details, it exudes a sense of magnificence at every turn. With 391 rooms, suites and villas, eight world-class restaurants and bars, 5,000 sq m Cinq Mondes Spa, cuttingedge wellness centre and yoga studio, 500 m white-sand beach and private cinema, Emerald Palace Kempinski Dubai provides a gateway into palatial living.